When my age was still in single digits I remember well being at a friend’s house and seeing “The Wolfman.” This black and white movie was made in 1941 and the iconic Lon Chaney Jr. played the werewolf. The movie left an indelible impact (read fear) on me and to this day I don’t like scary movies. So, it is a bit confusing to me why I am such a fan of the hit show “The Walking Dead.” I suppose it is the well-scripted postapocalyptic human struggle to find normalcy in a world ravaged by a zombie epidemic. I suppose then that it should be no surprise that I am equally drawn to the world’s struggle to find some sense of normalcy following the Great Recession, which first spawned ZIRP (zero interest rate policy) and now its scarier cousin, NIRP (negative interest rate policy). Last year I noted in a missive that the value of bonds trading at negative interest rates was approximately $2.25 trillion. Bloomberg now reports that there are $7 trillion, or about 30% of all sovereign bonds, now trading with negative yields. The idea that investors must pay governments for the privilege of holding their money indicates that we are moving in the wrong direction from traditional normalcy. Perhaps I’m looking at this wrong and we are moving closer to the “new normal.” I’m not sure which is scarier. The concept of negative interest rates is really contrary to human intuition and behavior and as a result it is conceptually misunderstood or altogether lost on most people. A negative interest rate policy turns on its head the innate financial tenet of a lender being compensated for loaning money. In the world of NIRP, borrowers are PAID to borrow money. As noted above, $7 trillion has been lent to Japan and several European countries and the lenders (owners of these bonds) are paying for the privilege of doing so. How can this possibly make sense? Well, Mario Draghi and Haruhiko Kuroda, the respective heads of the ECB and BOJ, have had their economic and financial minions run financial models ad nauseam in an effort to make sense of it and their conclusion is that it does make sense. However, Japan’s foray into the land of negative interest rates comes on the heels of its unsuccessful effort to stimulate their economy by implementing a quantitative easing program that was three times the size of the US QE. In fact, Japan’s QE program went well beyond buying government bonds. Mr. Kuroda took the extra step of having the $1.2 trillion Japan Government Pension Fund increase its equity allocation from 24% to 50%, just when stocks were peaking in September of last year. Not only have equity markets in Japan, Europe, and the US dropped significantly since this change in allocation, Japan’s largest pension fund reduced their bond holdings just in time to miss a historic rally in Japanese government bonds. Historians will likely argue that the wisdom and timing of this move was even worse than another Japanese exercise in bad timing; Mitsubishi’s purchase of Rockefeller Center in 1989. It is very easy to second guess in hindsight and doing so relative to Japan’s untimely reallocation is no different.

The recent sell off in the global equity markets and the coincident flight to safety seems to be an expression of dissatisfaction with the lemminghood of central banks’ current monetary policy, as well as disbelief that NIRP is the elusive elixir to stagnating global growth. Indeed, the markets are voicing their considered opinion that negative interest rates will not ignite growth, but will reduce net interest margins of banks, the primary metric used to assess a bank’s financial well-being. To wit, negative interest rates have been in place longest in Europe and European bank stocks have taken the brunt of investor selling. Credit default swaps (CDS) are financial instruments that provide insurance against the default of particular securities. The graph below shows the dramatic rise in the cost of non-US financial credit CDS, indicating the increased credit risk associated with a broad basket of senior and subordinated securities of European financial institutions. The downdraft in shares of European banks has recently spilled over to US banks as well, with a number of the major banks including JP Morgan, Citibank, Bank of America, and Goldman Sachs trading below tangible book value. US banks are far better capitalized than banks in Europe, which have 5X the amount of nonperforming loans and 10X the amount of commercial non-performing loans.

The takeaway here is that negative interest rates erode bank profitability, which is hardly advisable considering the questionable health of European banks. Moreover, while US banks are significantly better capitalized than their European brethren, US banks are at the tail end of being reorganized and recapitalized by government mandate and can hardly afford a misstep. The markets may be reflecting investor recognition that the monetary policy 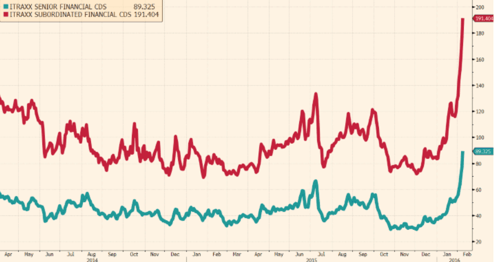 currently employed by central banks the world over is not working and that setting interest rates below zero is a step further in the wrong direction. The focus on monetary policy should be redirected to responsible fiscal reforms, which typically require some form of austerity. Unfortunately, austerity measures are never well-received and hard to implement without risk of social unrest.

What is most troubling about NIRP is that it is a step further into the same monetary policy that has proven ineffective for over a generation in Japan and for nearly eight years in the US. Nevertheless, the impotent results of such a policy have not discouraged Japan, the US, Europe, the UK, and many other countries from trying to make a failed policy work. Watching the same policy employed over and over without success one can’t help but think of the insightful quote from Albert Einstein: “The definition of insanity is doing the same thing over and over again and expecting different results.” Which brings to mind another Einstein quote: “Two things are infinite, the universe and human stupidity…and I’m not so sure about the universe.” We are fortunate that the invisible hand of the free market has the ability to hold a mirror up to such insanity or stupidity.

There are no easy answers to the questions at hand. Accordingly, we remain defensive in our portfolio positioning with a continued underweight to equities and a healthy allocation to non-correlated assets. As always, we appreciate your confidence expressed in your continued partnership with us and welcome your questions, comments, and insights at anytime