The stock markets steep and quick decline during the month of March made investors nervous wondering how things might end. After all, a pandemic that has shut down a good part of the economy is unheard of and leaves abnormal uncertainty. However, since bottoming on March 23rd, the market has shot back retracing nearly 60% of the downside experienced between February 20th and March 23rd.

One could reasonably argue that the market has gotten ahead of itself. After all, most parts of the United States continue to practice social distancing and the economy remains months away from resuming normality. Given this uncertainty, we’ve taken the approach of maintaining a defense posture within our clients’ stock portfolios. We recognize, however, there will come a point to take advantage of opportunities that are being presented.

In that vein, one facet of this year’s movement, which gets overlooked from quoting the market averages on the S&P 500 or NASDAQ composite, is the unusually large dispersion in returns. Bank stocks, for example, fell -47% during the market drawdown and remain down -33% from mid-February market highs. Conversely steady technology and digital commerce companies like Microsoft, Amazon and Apple have fared significantly better. In fact, the FAAMG (Facebook, Apple, Amazon, Microsoft and Google) stocks as a group have contributed a combined return of +2.2% to the S&P 500 year-to-date . The positive return of this group of five stocks is particularly important since they comprise a 20% weight in the S&P500. Without these stocks, the S&P 500’s -9.3% year-to-date total return (including dividends) would have been -11.7%. The strength in these stocks has thereby helped to hide the weakness in other parts of the market.

To help put the dichotomy of returns into perspective, the chart below depicts returns, by sector, for the S&P 500 year to date¹. 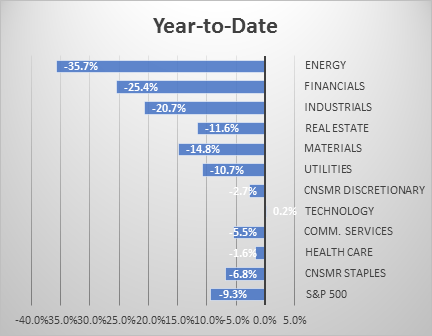 Looking at these results differently, we show how sector returns have varied during the initial downturn from February 20th to March 23rd of this year. The second chart shows sector returns from the relief rally we’ve experienced from March 24th through April 30th. 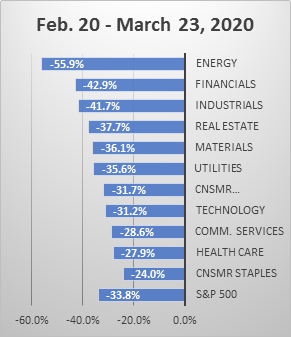 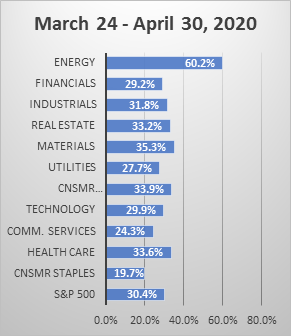 Our takeaway from these charts is that the initial market drawdown disproportionately impacted those sectors and industries that are more economically sensitive (i.e., airlines, manufacturing, banks, oil and gas). More consistent earners, such as consumer staples, health care and communication services held up better.

During the relief rally, however, there has been much less dispersion across sectors and industries, aside from a strong bounce back among energy stocks. Hence, those stocks that are more economically sensitive lagged on the way down but failed to lead on the way up (energy aside).

We believe this dislocation creates long-term opportunity, in several ways. First, at some point there will be a recognition that share prices of some economically sensitive companies have fallen more than the fundamental value of their business. Second, within the universe of economically sensitive names, we would expect some to come out of this downturn in a stronger financial position, while others will struggle to maintain competitiveness in a post pandemic world. Passively managed index funds will not discriminate between these two categories and will continue to hold weakening businesses. Alternatively, actively managed strategies with skilled portfolio managers able to identify attractive dislocations between price and underlying business value should be well positioned to take advantage of these opportunities.

We would expect over the next 1-2 years the extreme disconnect in valuations between more economically sensitive companies will become more apparent. This will create outsized opportunities, similar to what was experienced coming out of the Technology bubble in 2001 and 2002.

The opportunities, however, are longer-term in nature and we don’t expect an immediate reversion in prices until there is greater clarity around the timing of an economic recovery. Unfortunately, the COVID-19 virus will dictate that timing. In the meantime, investors should continue to expect markets to sustain an above average level of volatility. Further drawdowns are likely to occur, and therefore, we recommend sustaining a more defensive posture over the near-term. At some point, increasing exposure to more economically sensitive name will be a strategy we would expect to benefit investors.

Questions To Ask, Not Answer