In periods of turbulence those that are often overlooked can become a point of focus. In the world of sports, ESPN has gone from showing NBA and NHL games to the just as enjoyable cherry pit spitting and the stone skipping competitions. In the capital markets, bond markets after often the overlooked in comparison to stocks. However, over the past two weeks they have become a focus and a key reason why the Federal Reserve has taken such aggressive action.

In order to frame what’s occurred in fixed income markets, recall that bonds transact differently than stocks. While stocks are traded over an exchange, bonds are traded directly between investors and dealers. Bonds are also unique in that not all bonds trade in a given day. Therefore prices can be stale as they may refer to what buyers and sellers were willing to transact at a day or even a month ago.

A key difference in bond markets today versus during the Great Financial Crisis is the Dodd-Frank legislation, which required large banks to reduce the risk they took from proprietary trading. This meant that these large banks, which also act as bond dealers, are no longer willing or able to take large inventories of bonds that investors are looking to sell. Their role under this structure evolved from taking risk by holding bonds in their own inventory toward playing the role of match maker where they anonymously match buyers and sellers. When the market was calm and orderly, this was a sufficient service. As investors have become more concerned with risk, there are more sellers than buyers and dealers are no longer willing to step in to buy and hold the bonds in inventory. Compounding this structural logjam has been a number of corporations drawing down their lines of credit from banks and a rise in margin calls, which have led banks to dedicate more capital to these assets instead of making it available to their trading desks. The impact of this dynamic has created significant strains for corporate bonds, both investment grade and high yield.

The difference in yields between corporate bonds and Treasury bonds, referred to as credit spreads, had been near the lower end of its historic range going into February. Over the past month, as liquidity has dried up and investors have worried about the economic impact of the coronavirus, credit spreads have spiked higher to levels not seen since the financial crisis.

The bottleneck among corporate bonds, alongside strong demand for safe haven U.S. Treasury bonds, has created follow on effects across other segments of the bond market. The combination of a desire by some to de-risk portfolios, alongside leveraged investors facing margin calls as a result of lower prices, has led to forced liquidations. When being forced to raise cash, investors often go to more liquid and safe assets. This has led them to agency mortgage bonds, which have been trading at their highest spreads, relative to Treasuries, since the Financial Crisis.

In previous cycles, dealers would step in to provide some buying support with all of this selling pressure. Given the Dodd-Frank regulations, and demands on bank balance sheets from other areas of their business, it’s been harder to find a floor in prices. It is for this reason that the Federal Reserve has stepped in with a number of initiatives to provide liquidity to sellers. The Fed’s more recent initiatives, including unlimited Quantitative Easing, have proved helpful to the fixed income markets in the last several days that they’ve been in effect. In our view, the Federal Reserve did the right thing to step into the market as a large buyer at a time when the market lacked it. Long-term, they are going to be challenged in figuring out the best approach to reducing these positions, but one challenge at a time.

Municipal bonds are another area of fixed income where market dynamics have been a bit unusual. Since the Tax Cut and Jobs Act was put into law in late 2017, the municipal bond market had been in demand. As a result, yields were pushed to very low levels as there was a significant flow of money into municipal bond funds, particularly those that emphasized below investment grade bonds. Because of the large breadth in the number of municipal issues outstanding, liquidity is often times episodic for any given bond. Over the past month, there have been significant flows out of municipal bond funds, and similar to taxable bonds, far fewer buyers stepping in to purchase bonds. As we’ve seen yields on Treasury bonds fall significantly over the past month, yields on municipal bonds have risen significantly. 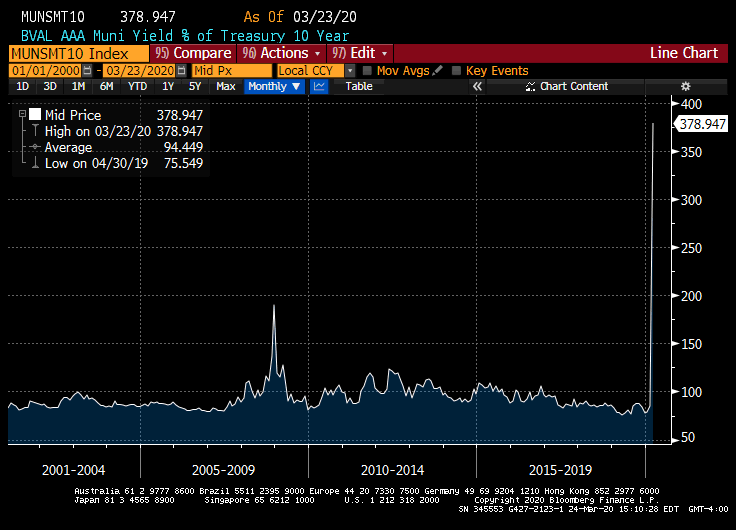 Short-term and overnight funding markets, often called money markets, have also been under strain. Banks often provide some liquidity to these markets through overnight transactions called repurchase agreements or repos. As bank balance sheets have grown with customers drawing down lines of credit or holding larger margin balances, they have had less capital to deploy toward repo transactions. On top of this, prices of corporate commercial paper have fallen as investors have looked to de-risk. These short-dated instruments are largely issued by high quality borrowers and have been sold off indiscriminately.

The challenge for money market fund portfolio managers has been whether they reduce commercial paper holdings, not because they are worried about the creditworthiness of the borrowers, but because they are worried about the price stability of the paper. This is of particular importance given the fact that money market funds strive to maintain a static net asset value around $1.00. Those choosing to sell to reduce price uncertainty have only added to the selling pressure and price instability. What’s unique about what is occurring in the money markets is that the dislocation is more driven by selling pressure and not weakening fundamentals of the underlying investments. The Federal Reserve’s aggressive actions to provide a variety of vehicles to support the overnight funding markets should be a positive to stabilizing this market.

One datapoint we noticed around the strain in money markets is the yield on 90-day T-bills, which over the last couple of trading days has gone negative, slightly below 0%. A high amount of demand for Treasuries that have more stable prices has driven this.

Where to Go from Here

So how are we reacting to what’s gone on in the fixed income market? We believe there are attractive opportunities emerging as a result of the liquidity driven dislocations in the fixed income market. However, in a period such as this, we heed to the old John Maynard Keynes adage, “The market can stay irrational longer than you can stay solvent.” Therefore, we’d rather not increase our clients’ risk by buying on the way down. Rather we are willing to miss the first inning or two of the rebound but do so having greater clarity that the balance between buyers and sellers in the fixed income market has been restored. The opportunities in fixed income are plenty and they are unlikely to dissipate overnight. We view fixed income to be the ballast of our clients’ portfolios and do not want to compromise this by taking undue risk. Over-time, we would expect to use our risk conscious framework to take advantage of select dislocations in the bond market.

See more like this
Our Perspective COVID-19 Market Updates